skip to main | skip to sidebar

The obstacle of Open Sources and Free Software I 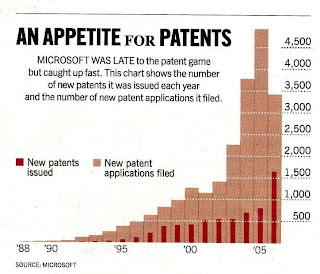 Open sources and free software are being used by more than half of fortune 500 companies (Parloff 2007).
Microsoft the software giant has highly patented its software products. Up until 2005, Microsoft has filed around 3,500 and registered over 1,500 patents (Microsoft cited in Parloff 2007, p.51) . As I myself works at a legal firm, I know that patents are very costly and not many sole proprietors can afford to patent their inventions. Many software developers has more or less included Microsoft's patented components in their products. Microsoft demanded them to pay the licence fees. For example, the Microsoft-Novell deal, Microsoft and Novell not only agreed to jointly develop and market products that allow Windows and Linux to work together more smoothly but also, Microsoft agreed to indemnify Novell Suse Linux Enterprise users from patent claims (Lemon 2007). This is definitely not a good news to the users. As a result, free software will not be free anymore. Probably, this is even a bad news to corporate users like AIG, Wal-Mart, AIG, and Goldman Sachs.

In December 2003, Microsoft's new licensing unit opened for business, and soon the company had signed cross-licensing pacts with such tech firms as SUN, Toshiba, SAP and Siemens (Parloff 2007).

Fortunately, Free and Open-source software (FOSS) has been fighting for the free world. Free Software Foundation president Richard Stallman, a talented programmer has dared to challenge the giant. I myself truly think him ground for the battle to Microsoft is very reasonable and widely accepted by free worlders.

Ernest Chui
This is Ernest Chui from Hong Kong. I did my first degree and post-graduate cert. at Melbourne Uni in mid-90s. After that, I have been working as an in-house IT specialist for nearly 15 years (the same company). Hopefully, I can exchange knowledge with you guys in next few months or forever.